A wet weekend up at Tunkwa, some storms passing through the area sure gave the woods some much needed moisture, and dropped snow up in the mountains around us. Fishing was excellent all through the past week with the stable warm weather. The lake continues to rise, and some surface temps up to 56F have been noted. The creeks are starting to get spawners in them to.
Fishing was up and down this weekend, due to the storms. Some guests reported that they had some unbelievably good action, while others just so-so, but everyone caught fish.
Chironomid hatches were coming off, but would stop with the storm fronts. The bite would go from red hot to near dead. Guests switched from chironomid presentations to leach, scud or attractor patterns during these lulls, continued to hook up, just not as fast and furious. Chironomids size 14, in any of the ‘bright’ patterns(chromies, ASB, GunMetals) have been consistent,weekend reports of any patterns with green in them have been a good bet. Black Sally’s or SnowCones have been working as well. The resort store is now well stocked up on our chironomid selection, with Dick Bartlett’s killer patterns and ties. Justin Sanders has us well stocked with his best producing micro leach patterns as well. Patrol Car, Olive ‘2 Tone’ and Chan’s Ruby Eyed leach, leach patterns are all good go-to choices right now. Fished down to about 6′ is key. They can be fished under an indicator during lulls in the chironomid action.

Trolling Hot shots or Kwikfish is still producing trout for our guests, with some of the bigger fish being caught trolling right now. Fish to over 5lbs have been landed this past week. Worms fished under a float continues producing trout as well.

Tunkwa has been fishing just unreal this spring, lots of happy guests with big smiles on there faces, confirming this! 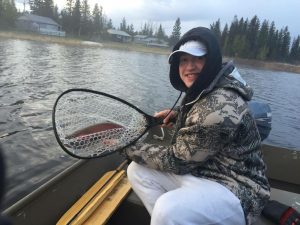 Scott Clarke, with a nicely coloured up 21″ buck he landed early Sunday morning. 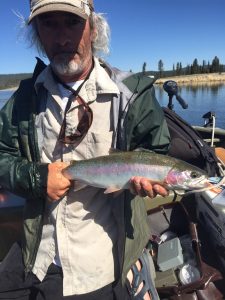 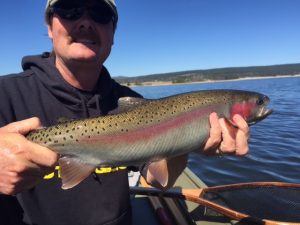 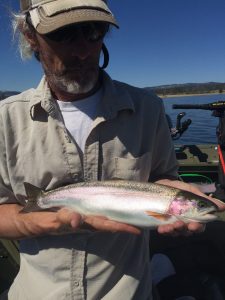 Joedy and Al got out for a few hours this past Wednesday morning and got into some better fish, lots of 18 plus inch trout in Tunkwa this spring, and man do they fight!!!
.