Last week we saw some pretty unusual weather, even by Tunkwa standards! Most of the week was scorching hot, then later Thurs afternoon, the cold front whipped in, pushed in by intense winds. Temps dipped to almost freezing at night, then snow was coming down in the higher elevations all around us. Back to some nice weather for the weekend.

We hosted the North American Loche Style Fishing tournament here last week, and the competitors had to deal with those challenging conditions, here on Tunkwa as well over at the Trojan Pond(n the HVC mine site). Great group of anglers from all over North America, as well as England and Scotland. A very well run event.

Mixed fishing reports, and unstable weather made it challenging at times. Hatches have been light, with mayflies, and some chironomids coming off. Cinnamon sedges have started to hatch, and anglers keying in on this have been doing well. Bloodworm patterns fished deeper in the lake have been the most consitent producer. Setting up in the lanes where trout are moving through is key!

Some nice fish have been caught while wind drifting or trolling, Doc Spratleys(black), Pumpkinheads and Blue Marroons. Hardware has been accounting for some trout as well.

Some guest fishing slip floats, with worms rigged under them, were doing well last week, landing trout to 4.62lbs.

We did see more better sized trout come to the net, with quite a few high 3’s to low 4lbers, and of course, lots of tales of the big one that got away! 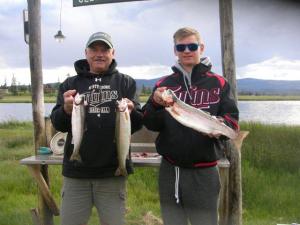 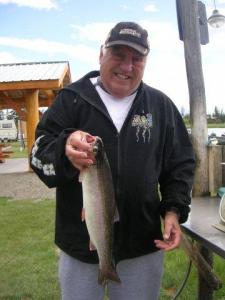 The North Shore Fish and Game Club had there annual get together BBQ/fishing derby here this past weekend. Everyone looked to be having a great time, and got into some nice trout as well..