Lots of unstable weather through the province this past week, going from 30 degrees to as low as 0 up here! Bug hatches have been sporadic, and fishing a bit spotty due to the instability of the weather. Reports from most lakes, sounded like the same fishing results all over.
Chironomid fishermen have been doing ok, but not really on fire, with flurries here and there, smaller chironomids in size 14/16 being best. The past couple of days guys have been having success on size 12’s, which is good to see. Greens or any of the shiny metallic patterns have been best bets. Mayfly nymphs in the afternoon, have been out fishing the chironimds. Some guests ahve been doing very well fishing damsel or attractor patterns, very shallow, and just a few inches below the surface.

When the chironimd bite is slow, we typically see the trolling presentations working better. Some good reports from guest trolling, or using the wind to get silent ‘wind drifts’ across the lake. Kwikfish in orange/black dot, or StoneFly patterns have been effective. Bingo Bugs in orange,PumpkinHeads, K Marts and Blue Maroons, have been producing as well.

Seeing a lot of nice trout being taken on the gold old worm and bobber as well.
.

We hosted the 2016 North American Loch-Style Fly Fishing Championship, which saw anglers fish Tunkwa on thursday, and other area lakes on other days. These anglers cast and strip there flies, with no trolling or anchoring allowed. Competitors got into fish, with darker mayfly or leach patterns best producers. This charity raising event saw a good turn out, and $21,000 went to ‘The Children’s Hospital’!!!! Great job guys.

The ‘North Shore Fish & Game Club’ also had there annual fishing derby here, some nice trout were caught by the members, and a good time was had by all! 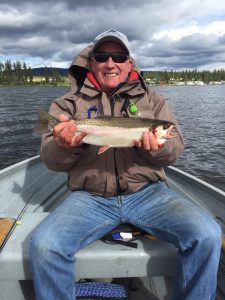 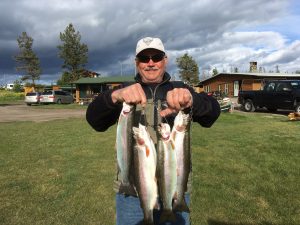 Some of the fish brought in by the North Shore Fish & Game Club. 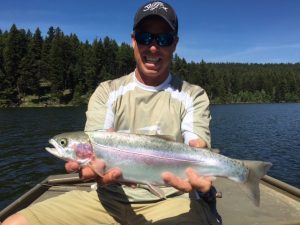 Our long time friend Derek Strub, on a vist here from Ontario, shows that a bass guy can ‘chironomid’ fish to!.