The hot spell broke later last week, with temps going back to more normal.We’ve had rain in the area the past few days as well. Night times are still nice and cool, dropping down to around 7 degrees.
Surface water temps are still hovering around the 70F mark. Algae bloom hasn’t really started.
Fishing has still been spotty, with the better action in the later afternoon, and evening, as the lake cools offs. Hatches have been small, and sporadic, but fish are feeding when this happens. Smaller chironomids and small mayflies have been the predominant hatches, but still lots of damsels migrating to shore and emerging as well.

Action has been on or off, as the trout decide to feed. Chironomid anglers have been doing best with bloodworm patterns, with cranberry, brass bead in a size 10 being the best producer. Chameleon patterns have been a good call as well. Fished close to the bottom in the deeper parts of the lake. Anglers are just slowly moving around, looking for pods of trout on there fish finders/graphs, then setting up on them are doing the best.
Trolling or wind drifting PumkinHeads, Maroon Leaches or Mayfly Nymphs(Halfbacks), is another technique that is working.

Guest trolling hardware are having mixed results, but best action is in the evening. Slow trolling HotShots or Bingo Bugs are working. We’ve been suggesting to guests trolling, to try trolling in reverse, to really slow the boats down, this technique, called backtrolling, is very effective when the trout want a super slow presentation.

Worms set up on a slip float fished in the same area chironomid anglers are set up, is always a consistent producer as well. 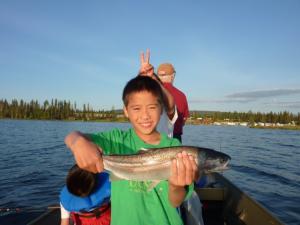 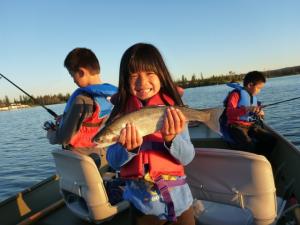 Here a couple of pics of happy little kids with fish!