Not really much new to report here.

We’ve had some nice sunny days up here, with the occasional day hitting the double digits, but most nights are dropping below freezing. Some snow came down on Sunday! The last couple nights hit -9, which skimmed over the open water edges.

Most of the snow at lake level has melted off, and is making it’s way into Tunkwa. The creeks are up and flowing nicely now to. The shorelines are opening up more, but now have a skim on them from the cold nights. The ice thickness is diminishing quickly, but is still pretty thick over most of the lake. Joedy has been out ice fishing over the past week(he has to wade or jump over the open water at the edge)and has been doing very well. Catching trout in 12′-14′ of water. Seeing the trout in this depths at this time of the year is great, O2 levels are excellent throughout the lake.

About 20kms down the road from us, are Morgan and Six mile Lakes, they are approx 2000′ lower elevation then Tunkwa, and both iced off last week, mixed fishing reports coming from there, but trout are being caught, even some bugs hatching some of the days.

We will keep updating our reports, as we build up towards ice off! 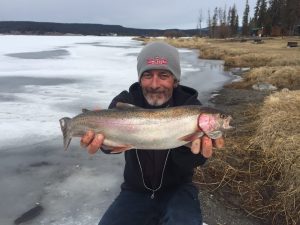 One from this morning bound for the smoker, Joedy said he ‘couldn’t keep them off’ they were “on”. There stomachs are absolutely crammed full of green Bloodworms, just an occasional scud.