Joedy and Nick fished Tunkwa today, fishing shallow(4′) they got into lots of action….more trout then they could keep track of…….,,Joedy guessed about 150 trout, Nick said more like a 100 or so…..doesn’t matter, that’s lots in anyone’s books!
Lots of smaller trout, as is typical for early season, those stockers from last year are aggressive. Some good fish in the mix but nothing really big landed.
Small balanced leaches under the indicator proved to be the best producer. Size 16 chironies worked but the balanced leach produced better sized fish and more action. Lots of swallows working above Tunkwa today as small chironies hatched heavy all day. Water temps are right around 45F, and some areas are dirtier where run off is feeding into the lake. The lake level is creeping up. Still lots of snow up in the hills to come down. 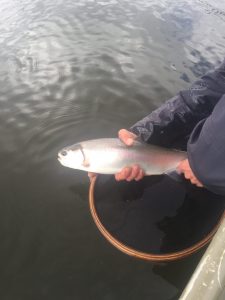 Who said fishing at ice off isn’t worth going out!