For the most part, we saw some pretty good fishing over the past week up here at Tunkwa! Summer is here, and we are having nice sunny warm days, but nice cool nights, mornings are still single digit temperatures.

The rainbow trout have set up over the deeper part of the lake, and have dialled in on the staging bloodworms. Fishing larger sized chiromomids in the 18-19′ parts of the lake has been working. The usual patterns have been doing well, CopperTops, Wine Sally’s, various ASB’s or green Bombers. Just figure out the depth up off bottom they are feeding at,set up on a pod of trout, and game on! Sometimes you’ll have to move often to keep on the trout, as they can be moving quickly looking for the next concentration of bugs. We’ve seen the bite consistently pick up later in the afternoon, into the evening. We have had some guests report having good action at dusk fishing dry flies as well!!

Trolling or wind drifting is still producing, esp later in the day. People have been in purchasing Kwikfish and Hot Shots, as they have been working well for them. Worms rigged under a slip float, fished in the same area the chrionomid anglers are fishing, will get you into lots of trout as well. 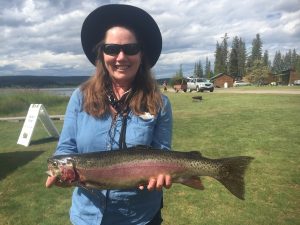 Someone has to do the catching, while others have to do the netting, eh! 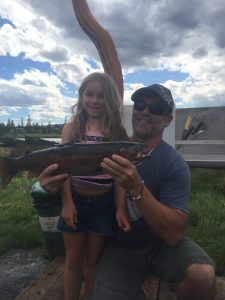